When you book with an account, you will be able to track your payment status, track the confirmation and you can also rate the tour after you finished the tour.
Sign Up
998

This private Morocco Imperial cities and Desert Tour is a great option to discover the full breadth of this diverse African country, exploring its historic cities and mountain villages, and meeting its welcoming Berber people.
Spend three nights in fascinating, action-packed FES, Explore Meknes and Volubilis, both UNESCO World Heritage sites, to unveil Morocco’s unique culture and past.
Experience Moroccan hospitality when you dine with a local family in their Marrakech home.
Get to know the local Berber nomad people with a visit to their nomad tents in the Sahara Desert

Casablanca is a bustling modern metropolis, and the beginning and end of our Morocco imperial cities and desert tour. Although the city is mainly a commercial and financial center, it is worthwhile to spend a couple of hours visiting the Hassan II Mosque, the largest mosque in Africa, before your Morocco imperial cities and desert tour takes you to the next stop — Rabat.
Rabat, the modern capital of Morocco and an official UNESCO World Heritage Site, was awarded second place in Top Travel Destinations of 2013 by CNN. There are many sites to take in, among them Chellah, a medieval fortified necropolis abandoned in 1154 AD, and Kasbah of the Udayas, an ancient castle built during the same period by the Almohads (Almohad Caliphate). After sightseeing, settle into a charming riad inside the old medina for dinner and sleep.

After breakfast at the riad, your Morocco imperial cities and desert tour continues to Meknes, which served as the capital of Morocco under the reign of Moulay Ismail (1672-1727) before it was relocated to Marrakech. Highlights include the Bab Mansour Gate, completed in 1732 and a stunning example of Almohad patterns ( Almohad Art ) and the Dar El Makhzen Palace.
The next stop is Volubilis, an ancient Roman city dating back to the third century BC. Today it is UNESCO World Heritage Center listed as “an exceptionally well-preserved example of a large Roman colonial town on the fringes of the Empire.” After exploring the ruins, continue on to the final destination of the day, Fes. Dine and rest up in a beautiful riad in the medina. 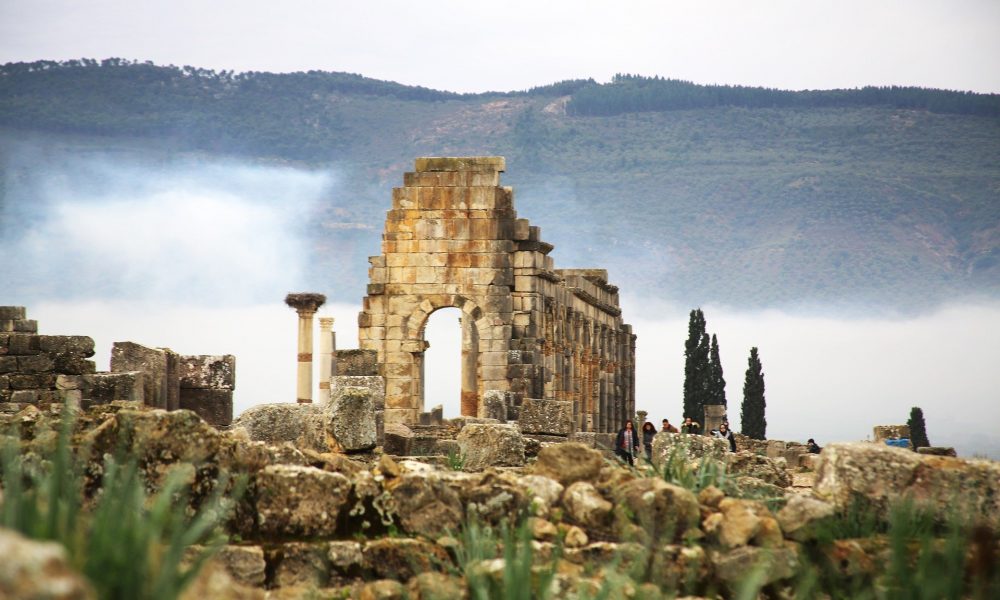 It is difficult to describe the sheer wonder and beauty of the second largest city in Morocco, the capital of Idrisid dynasty. The medina is believed to be one of the world’s largest car-free urban areas and is impossible to navigate without a trained local guide. A private English-speaking guide will assist through narrow, winding, and often unmarked alleyways while providing an account of the incredibly rich history of the area. Prepare for a sensory overload of sights, sounds, and smells, as hundreds of merchants and craftsmen sell their wares (dates, fish, spices, rugs, copper urns, crafts). A number of historic sites will be seen, including Al-Qarawiyyin (founded in 859 AD) the oldest continuously operating university in the world.

With Fez in the rearview mirror, enjoy a scenic drive through cedar forest to Ifrane, a European-style village with Alpine climate and a popular ski resort in the winter. Next, pass through the forested city of Azrou, surrounded by mountains and home to Barbary macaques, nearly domesticated by frequent interactions with human visitors. A few hours later, arrive “on a different planet” — this area of Morocco has been identified as being very similar in appearance and possibly geology to certain areas on the planet Mars. A kasbah in the oasis village of Erfoud will be home for the night. Relax in the refreshing pool before or after a traditional Moroccan dinner.

Begin with breakfast in the kasbah, the first stop on your Morocco imperial cities and desert tour on the way to the Sahara Desert will be in Khamlia, village of the former slaves of the sultan of Marrakech, where you can watch traditional Gnawa music and dance and have tea with a nomadic family. The rest of the day and night will be devoted to enjoying the large sea of wind-blown sand dunes. Quad biking and sand dune boarding are popular activities among visitors. Arrive at camp (basic and luxury options available) via 4×4 or camel ride for dinner and to take in the beautiful sunset in complete solitude. The chatter of the outside world is completely silenced here. 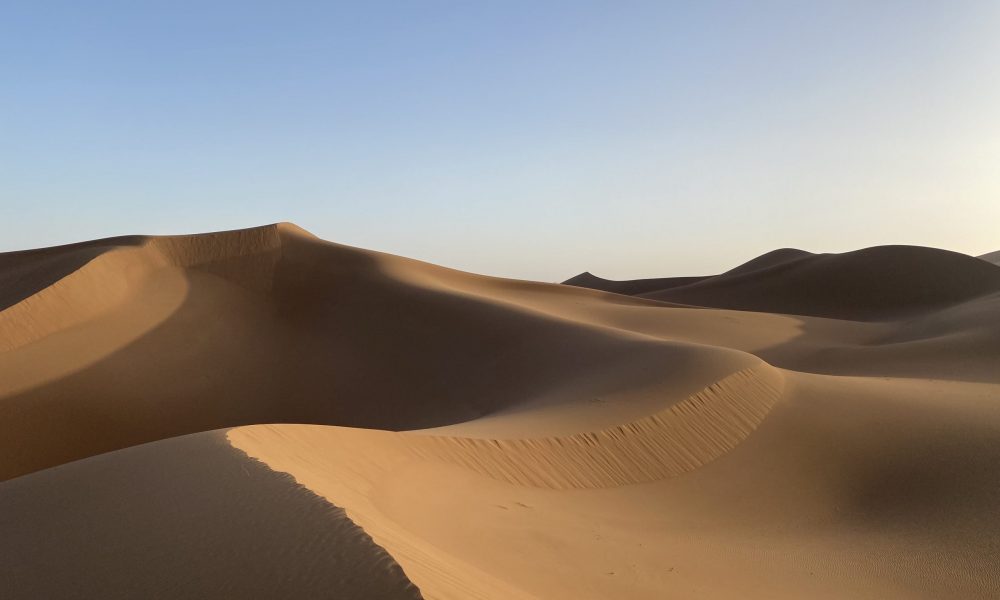 Day 6: The Dades and Todra Gorge

Sleep in or enjoy an unparalleled sunrise over the dunes, then hit the road towards yet another landscape change. Pass through Rissani, a former major caravan center, en route to Tinghir. At the foothills of the Atlas Mountains, the city of Tinghir is one of the most attractive oases in Southern Morocco. The main attractions of this day are the gorges. The Dades Gorge is scenic, with different types of interesting and unusual geological formations in a beautiful landscape with berber villages, plantations and the Dades River. The Todra Gorge is one of the most spectacular canyons in the world. Spend the evening in a local guesthouse near one of the gorges or in the palm grove of Skoura.

After breakfast, head to Ouarzazate, nicknamed “The Door of the Desert.” Ouarzazate is home to Atlas Studios, one of the largest movie studios in the world and film location of Lawrence of Arabia and Game of Thrones. Visit nearby Ait Benhaddou, is a fortified city, or ksar, along the former caravan route between the Sahara and Marrakech. A UNESCO Heritage Site, this striking formation is an excellent example of southern Moroccan architecture. The next stop on the journey is Telouet and a quick tour of the Kasbah du Pacha el Glaoui, one of Morocco’s most impressive kasbahs. Descend the Atlas Mountains towards Marrakech via the Tizi n’ Tichka mountain pass, a spectacular piece of French engineering built to replace the main caravan route connecting south and north. Witness a fascinating contrast of environments ranging from barren peaks and palmeraies to rich, red-soil farming plains and fertile valleys. The day ends with dinner and relaxation in a riad in the medina in the heart of Marrakech.

The last of the imperial cities is worth the wait. Marrakech is known as the “Red City” due to its red sandstone walls built in the 1100s AD. Marrakech has the largest traditional Berber market in Morocco and the image of the city is closely associated with the Jemaa el-Fnaa, the busiest square in Africa. Snake charmers, acrobats, magicians, mystics, musicians, monkey trainers, herb sellers, storytellers, dentists, pickpockets, and entertainers in medieval garb still populate the square. There are several notable sites and enchanting gardens to visit, including Bahia Palace, Koutoubia Mosque and Jardin Majorelle. 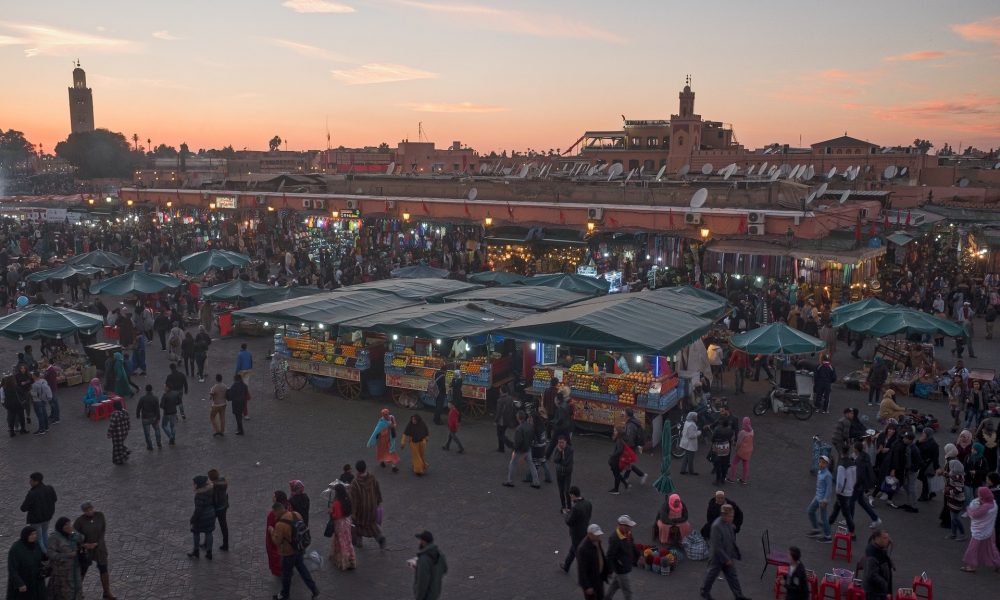 Consider a relaxing trip to a traditional hammam, or Moroccan steam bath, before heading back to Casablanca to conclude our amazing Morocco imperial cities and desert tour . 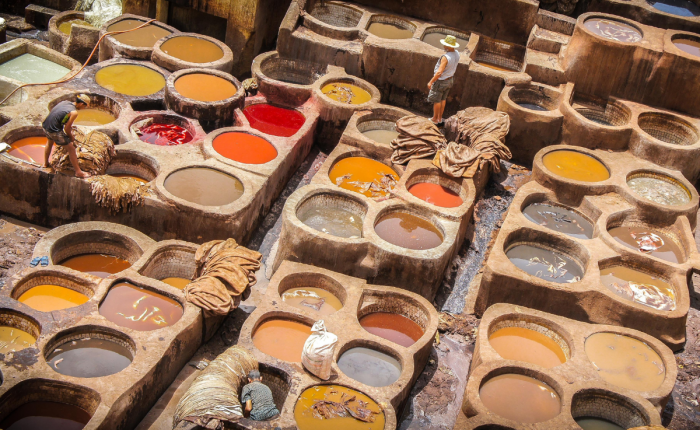 How to travel Morocco without making a detour to its old Medinas? In these maze […] 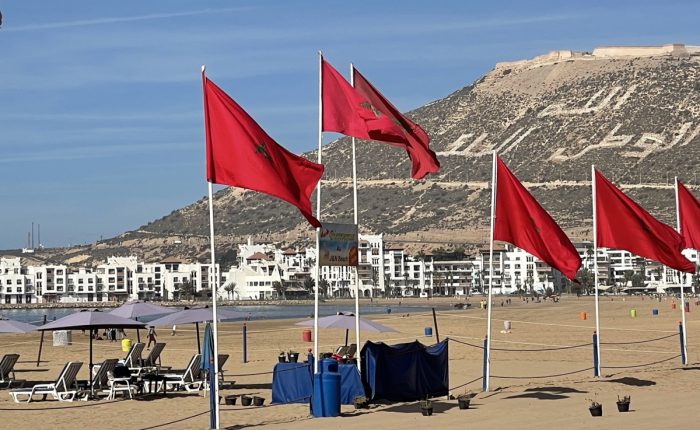 In the south of Morocco, the Sahara extends its immensity along the ocean. It is […]
WhatsApp us